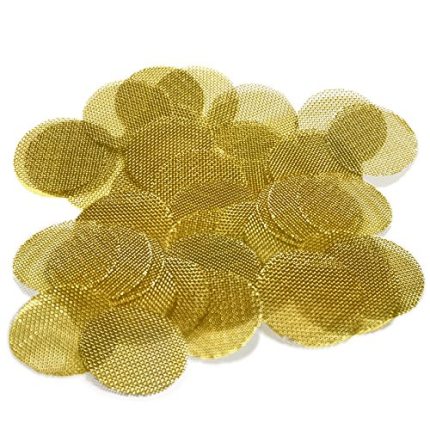 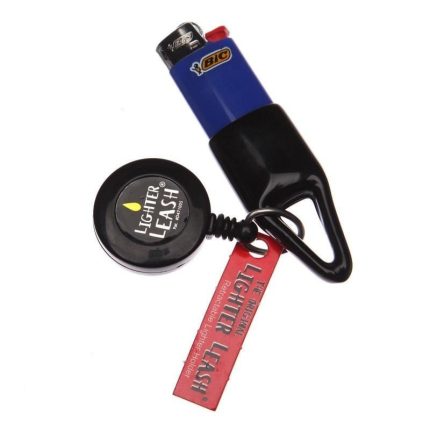 Never loose your lighter again with this handy pouch!  Attaches via a Loop to your belt.

The history of Zippo Manufacturing Company is the story of its people.  From its founder George G. Blaisdell, to the many Zippo employees, customers, and collectors who have all played a vital role in the company’s rich history.  Their loyalty and dedication has made Zippo one of America’s greatest and most recognizable icons.

The Zippo timeline begins in the early 1930s, at the Bradford Country Club in Bradford, Pennsylvania.  Mr. Blaisdell watched a friend struggle awkwardly to use a cumbersome, Austrian-made lighter.  Mr. Blaisdell noted that the lighter worked well, even in the wind, due to the unique chimney, but the appearance and design was utilitarian and inefficient.  The lighter required the use of two hands to operate and its thin metal surface was easily dented.

In late 1932 Mr. Blaisdell decided to reconstruct the Austrian lighter.  He fabricated a small rectangular case and attached a lid with a hinge.  He preserved the chimney design which protected the flame.  The result was an attractive lighter that was easily operated with one hand.  The name “Zippo” was created by Mr Blaisdell.  He liked the sound of the word “zipper” so he formed variations on the word until he settled on “Zippo,” which he felt had a “modern” sound.

The new lighter sold for $1.95 each and was backed by Mr. Blaisdell’s, now famous, unconditional lifetime guarantee ­–”It works or we fix it free.™” The application for the original Zippo patent was filed on May 17, 1934, and patent number 2032695 was granted on March 3, 1936.  That first Zippo lighter, produced in 1933, is on display at the Zippo/Case Museum in Bradford.

In the mid-30’s, Kendall Refining Company in Bradford, placed an order for 500 Zippo lighters.  These lighters are believed to be the first company-advertised lighters produced by Zippo and are highly prized collectibles.

World War II had a profound impact on Zippo.  Upon America’s entry into the war in 1941, Zippo ceased production of lighters for consumer markets and dedicated all production to the U.S. military.  This initiative led to the production of the steel-case Zippo lighter with black crackle finish.  The fact that millions of American military personnel carried the lighter into battle was a significant catalyst in establishing Zippo as an American icon throughout the world.  Supplying the military market resulted in full production for the plant and enabled Zippo to become financially strong and made it a viable company.

At the end of the war in 1945, Zippo returned to selling lighters to a peacetime America and resumed producing lighters for the consumer market.  A promoter at heart, Mr. Blaisdell wanted to hit the road with a car that looked like a Zippo lighter and in 1947 the Zippo Car was born.

On August 1, 1950 Zippo was issued its second patent, number 2517191.  The design of the Zippo lighter remains basically the same to this day, with minor improvements.

Beginning in the mid-50’s, date codes were stamped on the bottom of every Zippo lighter.  The original purpose was for quality control, but the codes have become an invaluable tool for collectors.

In 1956 Zippo launched the Slim lighter, which was a major milestone.  This slightly smaller version of the Zippo lighter was designed to appeal to women but much to his surprise also appealed to men.

In the 1960’s concert-goers began raising the Zippo flame as a salute to favorite performers, a gesture later dubbed the “Zippo Moment.”

In 1962 Zippo produced its first non-lighter product.  The steel pocket tape measure, or “rule,” as it was called, had a design that resembled the famous lighter.  Other items have been added and deleted from the Zippo line since the 1960s. Many were primarily geared to the promotional products division including key chains, golf greenskeepers, pen-and-pencil sets and the ZipLight pocket flashlight.

Mr.  Blaisdell passed away on October 3, 1978.  He is remembered not only for inventing the Zippo lighter, but also for his generosity and kind spirit.  After his passing, his daughters, Harriett B. Wick and Sarah B. Dorn, inherited the business.

During the 1970s Zippo began expanding to overseas markets.

In the 1980s the company was owned by six members of the Blaisdell family, including Mr. Blaisdell’s daughters and their children.

The Zippo/Case Museum opened in July 1997.  The 15,000-square-foot facility includes a store and museum.  It is also home to the world-famous Zippo Repair Clinic, where visitors can watch the repair process take place.

In the fall of 2002, Zippo obtained trademark registration for the shape of the Zippo lighter.  This was a major milestone to help protect the brand from counterfeiters.

In 2010 the company introduced an all-metal hand warmer, launching the Zippo Outdoor products.  The hand warmer uses Zippo premium lighter fluid and provides a steady source of heat longer than any other product on the market.

Zippo’s continued expansion in overseas markets, particularly India and China, as well as strong domestic sales led to record sales increases in 2011 and 2012.

In 2011 the Zippo Outdoor product selection expanded to include an emergency fire starter kit and flex neck utility lighter.

In 2012, during its 80th anniversary year, Zippo production surpassed the landmark 500 millionth lighter.

Also in 2012, the Zippo/Case Museum was remodeled to better reflect the Zippo brand.  The new modern design features a combination of rich and rugged textures, like leather and brick, and a mix of vintage artwork and lifestyle photography.

In 2013 Zippo launched a line of robust Zippo-branded camping gear and fire accessories.

Today, George B. Duke, Mr. Blaisdell’s grandson, is the sole owner and Chairman of the Board of Zippo.  Mark Paup is the company’s President and CEO.

Companies around the world continue to use Zippo lighters as an advertising and promotional tool.  These “advertiser” lighters continue to be among collectors’ favorites.

Perhaps one of the biggest influences on collecting is Zippo’s ties to popular culture, Hollywood, Broadway, and the music industry. The Zippo lighter has been featured in more than 2,000 movies, stage plays and television shows over the years. Zippo lighters have “starred” in such diverse productions as “I Love Lucy” “The X-Men” and “Hairspray – the Musical.” Often the lighter is a key prop, used as a device to move the plot forward or to reflect the personality of a character or time period being depicted.  The famous Zippo “click” sound has been sampled on songs, and the lighters themselves have been featured on album covers, tattooed on rockers’ skin, and wielded in Rolling Stone photo shoots.

In a world where most products are simply disposable or available with limited warranties, Zippo remains backed by its famous lifetime guarantee.  In more than 84 years, no one has ever spent a cent on the mechanical repair of a Zippo lighter regardless of the lighter’s age or condition.  The lighter is ingrained in American culture and is a global icon of durability and reliability. 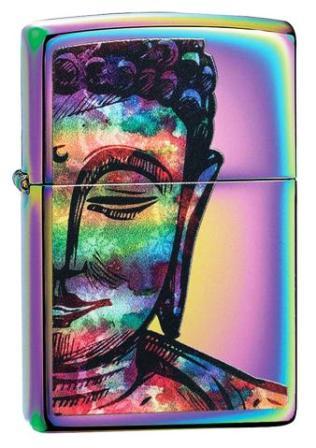 Kindle peace for you and your surroundings with this Bright Buddha Design. This Buddha design is color imaged onto a Multi Color lighter to add a splash of vibrancy to your meditation. Enhance your Zippo collection with this graceful Buddha lighter, a symbol of peace and harmony. Comes packaged in a gift box. For optimal performance, fill with Zippo lighter fuel.
Add to wishlist
Read more
Quick view 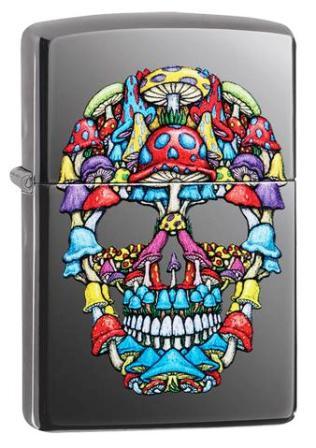 The spooky and psychedelic become one in this Skull design. The color imaging process is utilized to create a troop of multi-colored mushrooms to form a trippy skull on this Black Ice® lighter. Comes packaged in a gift box. For optimal performance, fill with Zippo lighter fuel.
Add to wishlist
Add to cart
Quick view 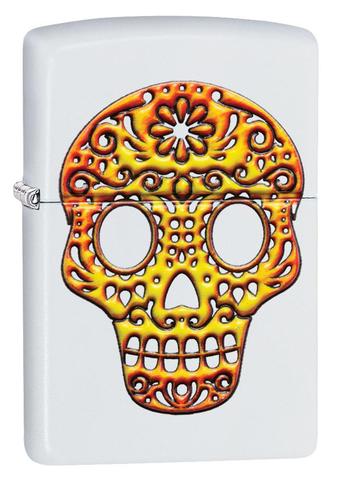 Una calavera, an intricately decorated skull art celebrating life and what lies beyond death, has been an important form of art in Mexican culture as far back as the Mayan and Atzec civilizations. It emerges in 3D from the surface of a White Matte lighter through Zippo’s Texture Printing process. Each decorative element can be seen and felt on this show-stopping design. Comes packaged in a gift box. For optimal performance, fill with Zippo lighter fuel.
Add to wishlist
Add to cart
Quick view 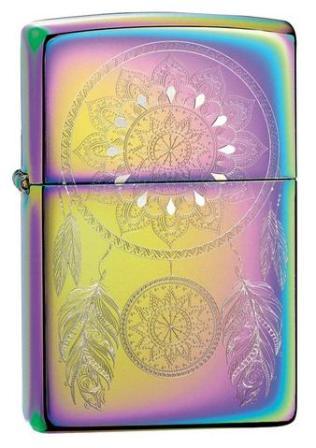 Using laser fancy fill, a small dream catcher is engraved into this multi color lighter. Carry this lighter to help assure good dreams to those with and around you. Comes packaged in a gift box. For optimal performance, fill with Zippo lighter fuel.
Add to wishlist
Add to cart
Quick view 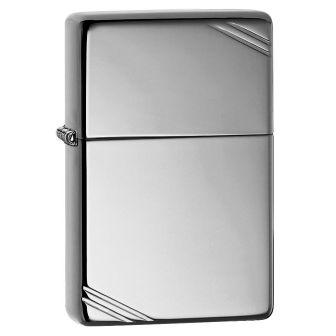 There's nothing old about this vintage model. This High Polish Chrome Vintage with Slashes features rounded corners and edges replacing the 1935 square case along with slashes at the corners. Comes packaged in a gift box. For optimal performance, fill with Zippo lighter fuel.
Add to wishlist
Add to cart
Quick view 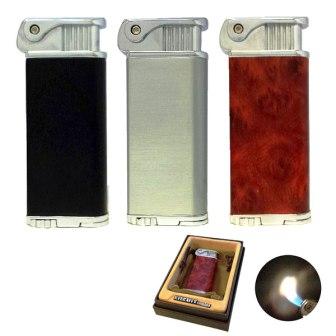 The Eternity Pipe Lighter is an affordable pipe lighter with a soft flame, a big flame adjustment wheel and a built-in tamper!  It comes packed in an attractive box with a velvet pouch.  3" x 1" x 1/2" Available in Silver
Add to wishlist
Add to cart
Quick view 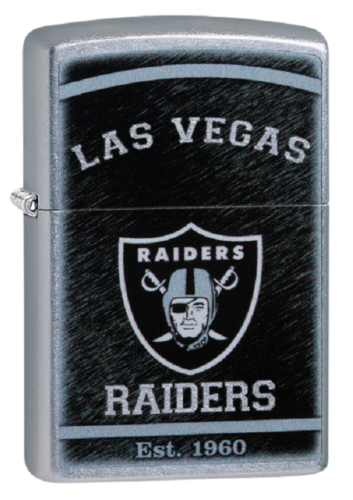 Zippo Classic Street Chrome lighter has a refined look that makes this lighter a classic gift. Introduced in 2001, the Street Chrome™ lighter has a random 'distressed' look, giving the lighter a pocket-worn look even when new. The entire surface of the lighter, including the sides and bottom, has been tumbled in a special media to replicate the random scuffs and scratches of a beloved, well-used lighter.
Add to wishlist
Add to cart
Quick view
Shopping cart
close

I am 18 or Older I am Under 18
Start typing to see products you are looking for.